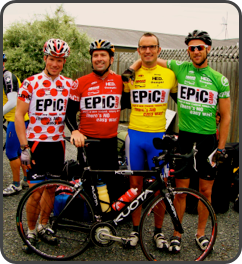 Gordo reckons he saw signs of me feeling tired. He seemed quite pleased. When I cursed at my gears he had further evidence though he reckons I didn’t swear …. I’m sure I did. Anyway … I think I am starting to get a little tired. Yesterdays combination of 20 minutes max effort at the start of the bike and 40k of running has taken a little toll.

Finally we managed to get a piccie of the current jersey holders. There’s Clas in Polka Dot – no way is anyone going to catch him. David in Green – this is for play of the day. Petro in Red – best older than Gordo. He’s battling hard with David for this. Me in yellow … I’m reasonably clear but despite Gordo and Scott saying I can only lose it I still feel I have to work for it.

So down to today. Run for the day was easy – just 2.5k each way to and from the pool. We swam in an nice open air pool in wetsuits. Gordo lead his “Monsy Set’” and we hit it on fast times:

For once I could have leisurely breakfast which is where Gordo ribbed me about looking tired.

On to the bikes and we had 20k before the KOM but this time there was  a mandatory regroup  before the climb. My aim was to place high with as little effort as possible which would be a lot of effort ( if you see what I mean). On the lower easier slopes I went to the front to pick up the pace – I wanted this honest. Then John came through and picked it up. He did several pushes and whittled it down to him , Clas, Scott and me. I stuck with them until Clas went. John eventually bridge leaving me with Scott about 20m back but well ahead of everyone else.  Scott has rolled so many people over the years on KOM competitions by being on their wheel  (often unnoticed) and pulling by at the end. I was very aware he was there. Scott made his move and knowing how shrewd a competitor he is I should have followed him but decided instead to cruise over the top in 4th and not overly exert myself. Scott bridged and ended up second with John 3rd. Bit disappointed John didn’t hold Scott off as it means he’s closed the gap on me in the KOM competition.

Through to lunch we had various good paced groups and I did at least my fair share on the front. At one point Gordo stopped me going through saying I could have my fun after lunch ! Then John came through and kicked it up a notch.

After lunch I missed the bunch leaving and it took me 10km of TTing to catch them. At lunch I’d established that getting my 25k run in tomorrow looked less likely. Consulting my watch I realised that I may get it in this afternoon if I was quick. So when I caught the group I just blew straight by them and no one got on. I TT’d the 46km back at 40+ kph most of the way. Completing 182km in 5:20.

Straight out for a 25k run. First 10k I ran at a decent pace with David then I did bits and bobs of the remainder with Petro. Pleased to get it done as it will make tomorrows run around Godley Head much more fun as I can just go with the group.

Quote of the day today is “He always looks like he’s riding downhil” – Molina on Lord_lordy. ;o)