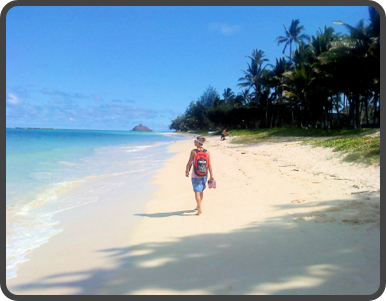 Here’s Jo wandering along beach near Kailua on the Windward side of Oahu. We’ve been doing very little other than relaxing. We’ve used the local buses to do a complete tour of the Island.

I’ve been so tired. I’ve slept the best part of 10 hours every night I’ve been here and I reckon if you include the snoozing I’ve been doing virtually anytime I lay down I think I’ve slept more than half the time we’ve been here.

It’s been nice relaxing about diet. We’ve had beers, chips, desserts even had a paleo feast at a buffet dinner that was serving the most delicious Prime Rib. Our friend Russell has been commenting on his carbfest on his blog. Well, take a look at this baby:

I did my best but even with a little help fro Jo this is what was left at the end:

It really doesn’t look like I managed much of it. I concluded the only person I knew that could finish this was Russell. Jo wondered whether ‘The Ginger Bullett” would have. Perhaps sometime soon we’ll have them both in Kona at the same time and we can find out.

Much of the time spent just relaxing doing nothing I’ve been thinking about the coming season. I’m very encouraged. Scott, as usual, hit home with the truth:

“…it certainly looks like you’ve got some work to do to get that foot right.  Its been 8 months now – that’s a long time.”

I’d never quite thought of it like that since I’ve been trying to get back in to running for a while but it has been 8 months. It’s made me rethink hopes for Bussellton. I think if I’m in shape to run 4 hours I should be happy. I do wonder how gutted I’ll be if I come in off the bike well under 6 hours but in no shape to have a shot at sub 9 hours. If that happens I guess it’ll just mean I’ll have to go back and race again especially as I’ve missed the boat to enter the fast European races next summer.

Got a couple more days in Hawaii before heading back to the cold British weather and getting back into some training. I’ll ended with an Hawaiian sunset.

This entry was posted in 2009, Kona and tagged Hawaii, Oahu. Bookmark the permalink.