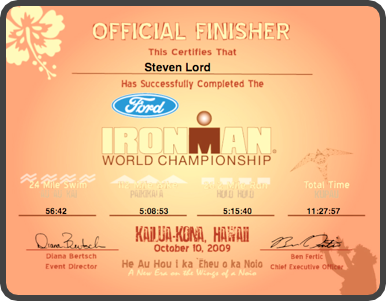 Following the buzz of race day the day or two after in Kona has a very low vibe. Jo and I are just chilling out before we catch our flight to Waikiki for a few days holiday. It’s going to be so nice to just hang out, have beer, not train. You should read Jo’s race report. Her description of race morning is spot on.

Before my break from blogging and training an entry on random thoughts about the race and such.

Firstly podiuming at Kona is now my No. 1 goal. I think I’ve stated this before but in my heart I’ve viewed it as a dream goal. Saturday was a real change for me. I now know I have enough talent to achieve that. I committed pretty fully in the run up to this race and pleasingly I didn’t fall short. The competition on Saturday was beatable and that is heartening to say. I’ve thought about what it would take but realised I no longer need to state it like that since an average run for me on Saturday would have been enough. So instead what are my goal splits next year that will put me in with a shout for podiuming:

1.Swim – sub 55 minutes. I need to continue solid swimming and draft better in the swim. More work on my outright speed would help to allow me to get the really fast feet early on (I was in amongst them briefly) and have the speed to cover surges. Perhaps I’ll get to train in the pool with Rachel again – I think that would help.

2.Bike – I can get quicker. Low 5 hours possibly under 5 on this course on a good day. Definitely need more focussed specific sessions. Longer intervals at race intensity and regular FAST long rides. This touches on me moving out of my training comfort zone. The leg cramping towards the end of the ride was a problem and I feel riding hard for long intervals will help.

3.Transitions – reckon these will be 3 minutes and 2:30 tops if I’m racing

4.Run – the big one. I need to be able to run again. I need to train on less volume and imagine taking a similar approach to Roger in making sure all my running is decent quality. I think running 3:20 off the bike is a reasonable target for next year.

In stark contrast to that is the fact that I may never qualify for this race. It’s contributing to my feeling of melancholy. I’ve no idea whether my foot will ever allow me to run a marathon. When I started running towards the end it was really aching and post race yesterday it was pretty bad. I think the cramp early on may have done me a favour.

The race. Boy oh boy is it awesome. I absolutely want to come back. NO DOUBT. It is  truly unbelievable. I heard someone yesterday say Lanzarote is harder. It was her husband, not her, that had raced. I don’t really think it’s harder than this. The terrain is but the environment here is brutal. The winds can be unrelenting and the typical headwind for the last 30 miles really catches people out. It’s taken 4 attempts for me to pace it well and be riding relatively strong at the end. The heat. It cuts you down. You may not even feel it’s hot but it drains you. Then there’s the competition – everyone is so fast the race is just different. More people around, more reason to push, more chance you just give a little more than you have to give.

The support is great. The supporters seem so knowledgeable. “remember to eat” or knowing you’re close to pace for a target time.

I was made to smile many times on Saturday during the run.

“ You guys are the best athletes in The World” just changed my perspective during the first few 100m of my walk. Quickly followed by “you’ve only got 15% of the course to do” !!

This race is also so fun because the athletes come out earlier for it. So if you have friends doing it there’s lots of time to hang out. Yes it takes an effort to steer the conversation away from the race, tapering etc… but that just adds to the electric buzz. So all those friends and readers out there trying to qualify – good luck. If I can help in anyway just ask. I look forward to hanging out with many of you in Kailua-Kona in 2010.

This entry was posted in 2009, Kona, Race Review and tagged Hawaii, Ironman, Kona. Bookmark the permalink.