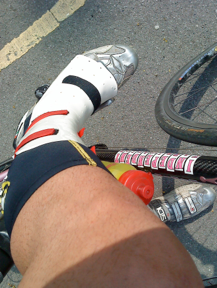 Amazing how the small things can make all the difference. I’ve been out for a few rides on my bike and my mood has increased tremendously. Following a theme since my surgery above is another picture of my foot as it’s progressively improved. My splint is proving reasonably useful now as it fits over my shoe allowing me to ride but preventing my ankle bending up beyond 90 degrees. In the saddle it means I really don’t notice it, out of the saddle it clearly impacts how i’d normally ride … so minimal riding out of the saddle.

I started my riding on Saturday with just over an hour including a few laps of Regents Park. I felt like I’d just had my stabilisers removed when I first got on the bike. I was also hyper sensitive about any sensations in my foot. I chose my words carefully – there were sensations (note I don’t say pain) but it felt like it was the scar so I kept going. Really gentle riding and not much of it. All went well but my foot ached a fair bit for the rest of the day. I knocked the planned ride on the head for Sunday and on Monday chose not to try out a swim as that would have involved riding as well. I must admit to patting myself on the back for being so sensible !

Roll on Tuesday, gorgeous weather and with me currently living less than a mile from Vauxhall station I took the train out to Dorking, met John and did a little loop including climbing Box Hill …pleased I’d remembered it right and I was able to stay in the saddle and spin up it. Dropped in on the guys in Cycles Dauphin to re-tell my story one more time. It was nice to have so much time for the ride so John and I sat for ages in the sun chatting over our coffee and cake. I did 2 hours (28 miles) and was surprised how tired my legs felt. Immediately pre injury I’d have had to do well over 100 miles to get any where near that sort of ache.

Most pleasingly of all about this ride was zero foot ache after. In fact, I reckoned my foot felt better though that was probably just my improvement in mood.

Last night I went for the club squad swim. The 600 warm up had my shoulders aching like I can’t remember. It dawned on me the 8 week break I’ve had from swim and bike is the longest break I’ve had in over 6 years. I continued and comfortably managed 10 x 100 on 1:35 so all is not completely lost. I gave myself another pat on the back by getting out after 2k. I want to see how the foot reacts before I push on further also pushing off on one leg was becoming a bit of a chore.

Finally this morning I headed to Regents Park. Met up with Gabriel, Sparky and Stephen. It was like the old days, even did a couple of laps with Damien and Tim. The weather was gorgeous. Gabriel was doing 20 minute efforts. I joined in on his second and was pleased that I managed to comfortably stay on his wheel as he belted round at 21-23mph. I only did the one, again wanting to see how the foot reacts before trying too much. We all had a super leisurely breakfast sat in the sun. Despite not having been to that cafe since Christmas they still remember my ‘usual’, what was unheard of was my inability to finish it. All the previous times I’ve been there I could have eaten a second breakfast immediately after.

My riding this morning was so much better than Saturday that it’s encouraged me that my return to bike fitness could be rapid. Looking back at what I did in Christchurch it’s clear I established a monster bike base and 8 weeks can’t be enough time to stop me being able to tap in to that.

Now I’m back doing at  least a little bit I finally feel able to really think about what I’d managed whilst in Christchurch.

This graph shows activity for this year so far. It does not give volume merely the proportion of each days training in swim (blue), bike (green), run (red), gym (yellow), other (pink). Grey is nothing. Guess when I was in a cast on crutches!

Something I’ve had a discussion with friend this week is about some of the crazy things we do. It was prompted by his 100m / 20m brick with the run at race pace !! I think there’s still so much to learn about Ironman training (isn’t that a huge part of the addiction?). A lot of the advice out there is still based on the individual sports. Most swim training is done based on pool swim methods. Similarly training for the run. It means we each have the chance to be our own little trail blazers trying to find out what works. Often it’s viewed as crazy but perhaps in years to come it may not be.

Take swimming. I’ve never come across advice to do over distance long steady swim. I always wondered why. It’s suggested for bike and run (though not for marathon – more on that later). My conclusion was it’s never suggested because it’s felt no one could face it in a pool. So, back to the crazy thing topic, back in 2007 I did a 10k TT. In a 25m pool. I still do long steady swims, normally an hour and see how far I go. If it’s good enough for running and cycling it’s good enough for my swimming. Recently Jo has been given some longer continuous swims … she knew it would make me smile so sent the schedule through to me.

The marathon – don’t ever train over X miles where X is always a few miles less than 26. Why  is this ? I’m guessing it’s because advice is aimed at the masses and it’s got to be politically correct – we don’t want people to risk getting injured (and sueing). Well, as Ironmen we are not the masses thats for certain. I’m not suggesting everyone does this only that you don’t limit yourself based on this advice. So you’ve run 22 miles without harm, why not try 23, then 24…. 28, 29, 30 ?? I’ve been known to do 10 hour runs in the hills in the past. But this does not compare to another friend of mine who this winter built up to doing a 26 mile run every weekend. Yes, he got to the point where running 26 miles was not considered an issue. I took this view with cycling … 112 miles should not be a challenge if you want to race it. Hadn’t considered extending that to the run … there you go I’m limiting myself. So, for the person in question did it work. Gee whizz it did – he ran like the wind, getting 12th fastest run split overall and winning his age group !

How did I get on to this given the start was training in Christchurch. Well… I headed out there and my whole focus was consistency … I never expected that to produce anything crazy. However some of the consistency in those 47 days was pretty good:

✴ 88 miles on average per ride

The result … well I never got to find out but I felt I was biking the strongest I ever have and I know I was swimming fastest. If I knew that lot had caused my injury would I have any regrets ? I certainly wouldn’t. It was heaps of fun doing the above. As it is I’m certain the above didn’t cause the snap … the snap was waiting to happen and that volume made it happen sooner. In some respects it’s a good thing… if I’d trained lighter it would probably have snapped later in the year and ruled out Kona.

Can I ever manage that sort of level again and find out how I would race off the back of it?I really don’t know. Too early to say based on this injury but also whether I well get back into that place in my head where I can just keep cranking it out. I’d like to get the opportunity though.

This entry was posted in Injury, Training and tagged Bike, FHL. Bookmark the permalink.