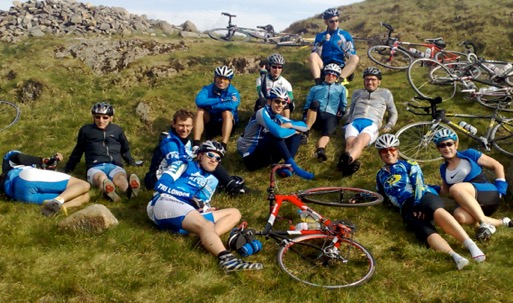 Myself plus a dozen other Tri Londoners headed north for the Bank Holiday weekend, escaping the storms down south, and enjoying 3 days of sunshine in the Lake District. Many arrived together in the ‘Sunshine bus’ and started the weekend as they meant to continue … no not by unpacking the bikes and giving the legs a spin but by heading out for Lunch !  For me the weekend started on the Saturday with five reps of Kirkstone Pass and then riding the Helvellyn Bike Route followed by an hours run off the bike.

The Fred Whitton Challenge kicked off with a massive feed in the hostel on the Saturday night. Jo and I cooked a great main course which was washed down with a little wine and beer and then followed by an awesome selection of desserts prepared by Kathleen, John and Morag.

The morning of the attempt Jo and I got up and headed out for a run – Jo got her 50 minutes done and whilst she got her bike ready I tagged on 10 minutes to get my hours done. I had a cracking breakfast of sausage, egg, bacon and  cheese – set me up for the day. We were on the road by 7.30am and soon heading up Kirkstone Pass. The highest pass on the route but only really a taster for what lies ahead. This route involves riding 112 miles over some 12 passes (Kirkstone, Matterdale, Honister, Newlands, Whinlatter, Fangs Brow, Kelton Fell, Cold Fell, Irton Pike, Hard Knott, Wrynose and finally Hawkshead Hill). The group rode well together regrouping at the top of each climb. Varying levels of enthusiasm early on saw some full of beans pushing on, whilst others, notably the Tri London King of The Mountains points winner, holding back early on knowing full well what was in store. First stop was at nearly 40 miles just ahead of the first major climb – Honister.  A cracking 25%er though I imagine most would agree that the hardest section felt harder than that. The King Of The Mountains form continued from last week with Alex and Luis getting to the front. Luis staying in the saddle for, almost a disrespectful time before finally having to get out for make progress. The wind was on our backs here but it meant in our faces for the hardest climbs later on. Two climbs follow in quick succession before we had a sit down and regroup at the top of Whinlatter (the point of no return!).

Fantastic that no one chose to turn back at this point and we all enjoyed the awesome descent into Lorton – spinning top gears at 40mph through sweeping bends helps remove the pain from the previous climbs and the thought of whats to come. The next section is in one of the qietest bits of the lakes and is disceptively lumpy robbing precious energy from the legs. Another awesome descent from Cold Fell brought us to the second feed stop in Gosforth. Still Chris and Kevin seemed to not believe me when I said the hardest climb was still to come.

The ride up Eskdale always seems to take longer than expected, the whole time you can see any chance of an easy exit getting removed until finally you see a road insanely snaking up a fell side. This is Hard Knott pass – the toughest part of the whole ride and we’ve only done 90 miles and 9 passes as warm up! The group falls into silence and finally come to the red phone box which marks the start. It kicks up immediately and a cattle grid early on doesn’t help. The climb is insanely steep for a long time early on (30%) and you have to red line for minutes to make progress. The winds were gale force and in our faces. It was clear to me this would be the toughest it’s been. The first section was so much harder than I remember I think due to the gale force winds. I had severe doubts about completing the climb despite having never failed an attempt There’s an easing off halfway and I took the opportunity to take it easy and catch my breath. Ahead you can see the steepest pitch (some 35%) and I could see Luis and Alex ahead. As I hit the hard bit I see Luis come to a stop on the steepest section. There are cars coming down so you can’t use the full road and on this section the tarmac is very worn so you hit bumps that virtually stop you. On a few occassions I could only just get the pedals round quick enough to be able to start the next pedal stroke. I power past Luis with Jo not far behind. The gradient eases off to about 25% and I think it’s all done now just keep it together and you’ll get the top. Then the wind really hits and this feels even harder. Alex keels over sideways ahead of me leaving his bike in the middle of the road. I shout “Move your bike Alex!” which prompts him into action just in time to prevent me coming off as well. Approaching the brow the wind is so strong I can hardly move forward and on the top I can hardly stand up. I get shelter just as Jo finishes – an astonishing effort to be the only other person to ride the whole thing. In this wind I was surprised she’d not be blown away.

It was almost a party atmosphere as every arrived at the top by various means and hunkered down out of the wind, in the sun, to watch the others arrive. Everyone made it to the top and were buzzing. The descent was serioulsy hairy and then along the valley to Wrynose – the wind was so strong we were largely in our bottom gear on the flat. Luckily as the road steepened it got out of the wind making Wrynose manageable. I felt very light headed on the ascent of Wrynose, which bizarrely seemed to help as I was not fully aware of my legs. The descent was interesting due to a broken down car and a BMW driver (the sort that gives BMW drivers a bad name!) – I think we all gave him some choice words as we snuck past. About half the group had a highly amusing sit by the road waiting for the others and watching various drivers in cars two wide for their driving skills try and edge by !

With one climb left we had 4 of the group decide to call it a day. Morag had a hot date and headed off  whilst the others, having spent 10 hours riding over the toughest climbs in the country, much into gale force headwinds found the lure of a sign saying “Ambleside 3m” too much and took the left turn rather than the right required to complete the route. After splitting the main group headed down some of the best riding of the day – the sweeping bends into Coniston. I tried to do the jump on Alex and Luis approaching the brow of the hill but Luis managed to hop on my wheel to do a little “Sandbagging”. Glad he did as I had someone to share the 40+mph pedalled descent through the twisting roads … we were beaming as we waited for the others in Coniston. Hawkshead Hill – the final one. Time to give it all you had left. I absolutely pummelled it and was interested to see who would give chase… only Luis did and he maintained his distance never able to pull in the gap I’d managed to jump on him early on. We were all wasted at the top. More or less downhill from there. 5 stopped for a pint at the Drunken Duck whilst the others headed back to run off the bike !

I managed to get myself out for a run and felt I’d only do 20 minutes but I felt great right from the off and ended up running for 70 minutes before getting back for some food and then most of us chilled out in the living room of the hostel  and chatted away getting merrier and merrier.

To round off the weekend Jo and I got up next morning and were joined by Kevin and Alex for a lovely run round Rydal and Grasmere – just over 90 minutes before breakie. Jo, Sparky and I then did a 60 mile ride out into the wind to Greystoke and enjoyed an awesome ride back with a tail wind.

Absolutely awesome weekend and I’m completely wasted as a result. Yesterday and today I’ve only managed swim sessions. Tomorrow I should be back into full training.

This entry was posted in Big Rides, Training. Bookmark the permalink.