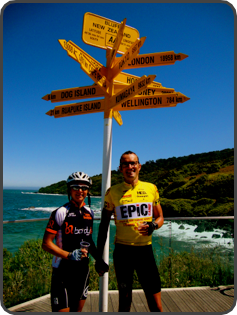 It’s over and I’m back to ‘normal’ life. Well normal as my life is currently. As Jo says it’s funny having little to do when you’re not in your own home as you really do have little to do. I’ve enjoyed the downtime so far. Yesterday I spent a long time in the QEII cafe chatting with Clas. I then when to the movies before Jo and I went out for dinner and then coffee with Clas. We’d hoped he’d stay in Christchurch to train with us but I’m sure he’s making the right decision going home and recovering. With luck we’ll all be back here next year training hard for yet another Taupo and will all be heading to great results.

Riding end to end New Zealand in the Epic Camp environment is something really really special. Big challenges are best shared as it ensures you have people that really understand and with whom you can reminisce. The dinner at the end of the camp was such good fun because of such a massive shared experience. Most ended up in the hotel bar probably through a feeling of we should be celebrating but more or less all of us were just way too tired to really go for it. That was funny in it’s own way.

Everyone on the camp coped superbly and did the fully distance on the bike. Point to point riding every day certainly helps you mentally to just get going. Like a lot of this type of thing my approach is just to think about starting – no need to worry about the rest just the start everything else will follow. Contemplating the whole in one go can be pretty humbling. This feels like a similar thing to Clas saying “You can always quit later”. No one quit. That is cool.

What was the hardest thing for me. Well it was never completing. I never doubted my ability to complete. I’ve been zonked out so many times on the bike or fell running to know that you can always keep going. Well … provided you or your bike aren’t injured. Throughout the camp there was an underlying feeling of uncertainty about my foot. On the first day I really considered not tacking on or trying hard on the 10k race. Both would have put me out of the running for the yellow. I’m so pleased that my competitive reaction kicked in. I trusted that I would feel problems with the foot and would ease up. I pushed it a lot and I got no signs of problems. I cannot tell you how pleased I am about this. This week I am not running to give it a chance to strengthen (if it needs it).

Then there was my chain problem. Right there could have been the end of my camp completion, yellow jersey and riding end to end. if it hadn’t been for the camera crew following us round I don’t think I would have completed.

Toughest moment was the first King of The Mountains on the south island. Having lost so many points in that competition due to my chain break I was keen to stamp my authority back on it and get second (I never thought I could beat Clas). The points were still close and it was pretty clear that the KOM points could be relevant. I’d decided to attack hard early and TT to the climb. Others went first but I pulled through and kept pushing flat out. Reading other accounts it’s clear they were close to bridging and if I’d eased up at all they would have. I was confident that if I kept going flat out I could drop everyone but Clas. However about 5 minutes in I had my doubts, I was hurting hugely and wondered whether I’d misjudged it but by then I was committed as I was sure if I blew I would end up last and lose loads of points. Still having Petro and Pete with us didn’t help. I’d kept thinking that whoever was on the front of the chase was sacrifising their race to catch me for the others. Who would do that ? I felt if it was just Clas and I out front they would just let us go being happy with third. But as it was it seemed they’d chase us. That 20 minutes is the hardest and toughest riding I’ve done on the camp and possibly ever. The buzz at the top arriving ahead of the pack was well worth it. On top of this I ran 40km that day to really try and take the yellow. I felt similarly to last year on the day I did two 2.5 hour runs. It was a statement of intent, that I was willing to bust a gut to win it.

I certainly want more of this sort of camp riding. The thrill of riding at pace in groups, trying to hang on, trying to ride people off my wheel, covering breaks, busting a gut to stay on someones wheel as they surge at the start of a climb …. it’s all just such good fun. No tacking on for this camp allowed me to enjoy all this so much more since I was willing to really give the rides my all.

The yellow this time is the most satisfying as I didn’t just win it by riding a tonne more than anyone else. There were people that ran more than me and some that swam more than me but no one with as big swim and run volumes. I would hazard a guess that I covered the distance on the bike faster than anyone – I left last and largely arrived first at lunch and the finish. I placed well in the competitions as well. I’ve said to myself that on another camp I’d try and relax and just enjoy it rather than go for points but wearing the yellow is quite a thrill.

For those that are interested here are my camp totals:

This entry was posted in Epic Camp, Epic End To End NZ 10 and tagged Christchurch, New Zealand. Bookmark the permalink.