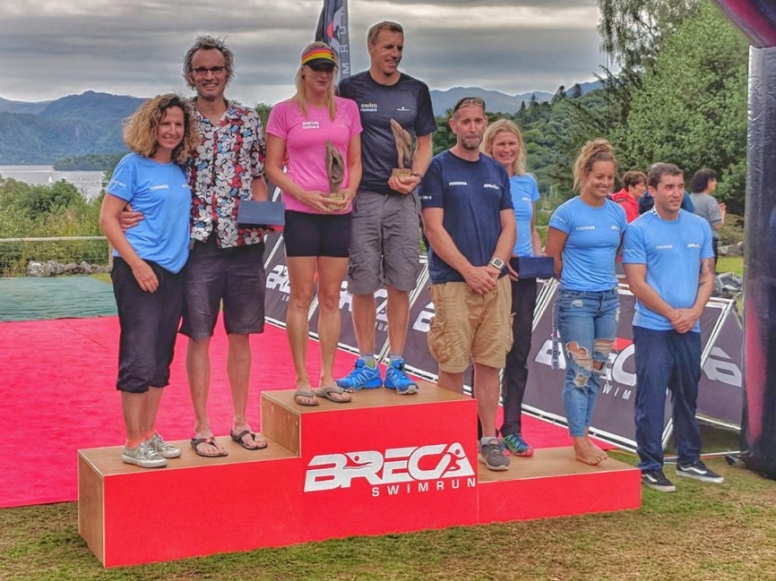 LONG REPORT
This was the first running of a separate sprint event and the new course around Derwent water looked great. The weather forecasts we’d seen in the run-up kindly proved wrong as we lined up on the start line in lovely weather.

The race started with a couple of tight ninety degree turns so we placed ourselves near the front to try and not get caught up in the masses.

The first run is 400m downhill to the first swim which was listed as 400m, so we felt by the end of the swim we’d find ourselves towards the front and have pretty clear trails / swims from then on. However the first part of this “swim” was more of a wade. It was very shallow, but we tried swimming which was a little quicker than those walking around us but still tricky. After a 100m or so it got deep enough and we managed to get through towards the front.

The swim around Lord Island was the last swim before a long run and it looked and felt a fair bit longer than the other swims. We couldn’t see too many swimmers ahead and started to claw them in. I tried to stay just deep enough to keep swimming. Those ahead kept standing and walking bits but it appeared it was quicker to do what we did. We came out of the water with the final pair that we could see and were clearly well up the field (with hindsight we were probably 2nd at that point with the leaders aways ahead already).

We had walked this part of the course the day before, so knew we had a decent climb ahead – diagonally up below Walla Crag. Several teams started to catch us here – including Lotte and Heather. We pretty much did the ascent with them. We managed to run a fair bit of it only walking the steepest sections. Halfway up the climb there was a fork where the team ahead were unsure of directions as the sign seemed wrong. We told them and moved the sign to point the right way. 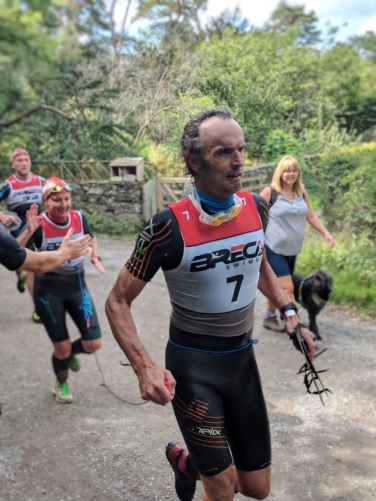 Rachel is improving on the descents and though several teams passed us, we weren’t too slow on the descent and didn’t lose too much time.

Next up was a great crossing of Derwent Water via two Islands followed by a short run to another swim. Very swim heavy so we knew we’d catch lots of people. This section went:
300m swim, 100m run, 400m swim, 300m run, 600m swim, 900m run, 400m swim !!
The first island was just a quick dash around it’s northern shoreline. We hauled Heather and Lotte in by the end of the second swim. The next Island I remember from last year (in reverse) as it was a little confusing. This wasn’t helped by some random fellow, who we initially thought was a marshall, apparently running ahead to show the way. This lead to some fallen trees to cross and then some bushwhacking to get back to the path. Lotte and Heather made the mistake of choosing to follow us.

Onto the long swim and a chance to drop them! But no, they stuck with us. At times I could see Heather pull along side Rachel and I wondered why she didn’t just sit on her toes. On the shore they pulled away and we were on our own. We didn’t catch them on the next swim so I knew that would be the last we saw of them as the biggest run was ahead of us.

As we set off on the long run we hit some tarmac with a path running by the Lake but we couldn’t see a sign. Luckily some walkers told us runners had gone down the path. It also seemed the ‘right direction’ so thats where we went. This was the path I knew went round the south of the lake back to the road on the opposite side to where we would run, so I was looking for a right turn. As we approached what looked like the right path we saw the marker but it was pointing straight on. It seemed wrong. Why put a marker there if you had to go straight ? We asked some walkers if they’d seen runners – which they had – but that doesn’t make it the right way ! We paused slightly and I concluded it had to be right. So I fixed the sign and continued on, soon reaching the check point and aid station. I asked if the lead ladies were through. They weren’t, confirming that Heather and Lotte had followed the sign – they don’t know the area very well so wouldn’t have had any way of knowing.

Now was the long run for home, along the side of Cat Bells. It was warming up but we decided it wasn’t worth taking our wetsuits down. As we approached the path off the road we finally saw competitors that had been behind us, but were coming from the wrong direction. They’d clearly missed the turn after the last swim. I told them they’d gone wrong and that if they continued on the road they’d hit the check point but would have cut the course (I was guessing probably missed about 1km). The front guys pointed out loads had followed them and there seemed to be indecision about what to do. I left it up to them and I think they all just ran down to the check point.

We couldn’t see anyone behind as we climbed up the side of Cat Bells. It then contoured round and we could see pairs coming up behind. At the end of Cat Bells there is a zig zag in the road and whilst I didn’t known the path from here I did know that it wasn’t on the road. There were no signs but two marshalls were there. Unbeknownst to us the second mixed pair had arrived after the markers had been stripped (apparently on the latter part of the course, they believe someone had removed the markers, despite a course checker, who runs ~ 30 mins ahead of the leaders) and had gone wrong.

We were caught by some guys running down to the next swim. I was determined to stay ahead as, although I couldn’t be certain, I felt sure that they all must have been the teams that missed the turn and had thus unintentionally shortened the course. We had a 300m swim then 500m run so hoped we’d have no problems staying ahead of them.

Unfortunately… the last swim really wasn’t a swim but rather a lottery. We got in where the mud at the bottom was so deep that it went beyond my knee and felt caught between two rocks. Rachel had to help get it out. We ended up floating trying to claw across it. I went wide and found enough depth to swim whilst most others tried to walk it. We pulled ahead but as we got out our cord got caught and Rachel couldn’t move. I got irrationally annoyed at her as I could see the others coming. Once she was clear we ran as hard as we could to finish.

It was close but we crossed the line ahead of this chasing pack. The next 5 pairs arrived in the next 40 seconds !! It turned out we were 6th team across the line and 3rd mixed. Of those ahead three pairs had gone wrong. Two had completely missed the last swim (due to missing markers at end of Cat Bells) and had arrived at the finish from the wrong direction and ahead of the leaders. It turns out the leaders had entered the final swim early and done extra but they were miles head (28 minutes ahead of us!) and still finished first. I felt for the second mixed pair as they were clearly a lot faster than us but had missed a whole swim out.

As we were chatting to Ben we saw Lotte and Heather come across the line looking pretty destroyed. They had ran all the way to the road before realising and turning back (~ +2km). They’d arrived just under a minute behind us and still won their category!

It was lovely going on the podium with Rachel and even better when we saw we’d won a lovely pair of engraved whiskey tumblers (negronis).