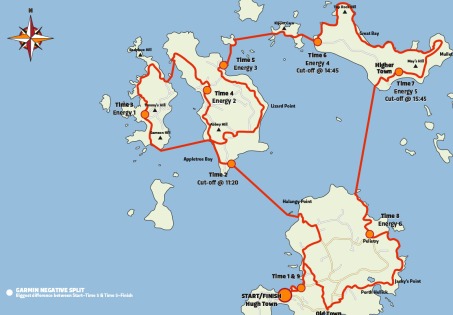 LONG REPORT
Waiting for the start both Andy and I commented to each other how racing the sprint the day before makes us so much more relaxed for this race. We’d both trained well in the previous months. I was quite excited about our swimming as Andys swimming (especially with paddles) had improved dramatically making me think I’d hardly be towing him. Also, my running post Croatia was completely different. To give an idea – in the year (~ 3.5 months) to that point I’d run ~ 85km, in the  2 months post I’d run over 400km taking my Chronic Training Load (fitness) from 8 to 40. We’d agreed to run a little harder at the start but still placed ourselves about middle of the field in the pen. It was another hot day and after last years meltdown on Tresco we agreed to pulling down wetsuits on the main islands.

Straight from the gun we run relatively hard. Relative for us it was hard but still relative to everyone else it wasn’t that hard. We actually ran up the first hill and by the first swim entry we weren’t close enough to the back of the field to get a “whats taken you so long” from Rachel. In hindsight it would have been good to go harder as we were reduced to walking some of the singletrack down to the coast. With wetsuits up though it was boil in the bagville so I wasn’t too unhappy.

The tides were different to last year so this swim start was particularly tough with about thigh deep water, big boulders and lots of seaweed – there was a lot of grief getting to be able to swim. Once we were it was great. Andy has improved a lot which meant I couldn’t feel any tension on the tow line. It meant we were moving faster and were moving through the field rapidly. I couldn’t distinguish the sighting buoys from the caps ahead so I just decided to follow the average line of those ahead. In the middle of the swim it felt like the route markers had hunted out the worst kelp field to place the buoy in the middle. With the lower tide this seaweed brought us to a complete hault. We had to stop to untangle ourselves in the middle of it and once clear had to stop to remove all the seaweed we were now towing. It was far from pleasant and I can imagine it could panic less confident swimmers. The rest of the swim was uneventful and we soon exited on Tresco for a short 1km run before the next swim. Most of this run is on a soft sandy beach which is torture.

Next was a swim across to Bryher. The water for the whole 1+km crossing is really quite shallow and it makes for a very pleasant crossing. Sighting is a little tricky as you can’t see the exit so have to use there red and green buoys to judge your line. We continued to catch other teams but by the end of this section we were amongst teams that were very similar swim speed to us. The final bit of this required a big arc’d detour around a big kelp field.

We were now on Tresco so Andy decided to pull his wetsuit down straight away following his over heating incident of last year. I left mine up but noticed that I was breathing far heavier than Andy and felt it was the tight wetsuit across my chest so at the aid station I pulled mine down. It was far nicer running with the wetsuit down. We were now in our correct position in the field (it hardly changed from this point) and didn’t see any other teams for the majority of this section. We run through the Tresco gardens and continued to note landmarks from last year which were associated with the various stages of Andys overheating. We chatted about the various incidents on our previous races:
The Florida Manoeuvre in Sweden
The Endagin freeze
The Scilly Isles meltdown
The Buttermere Climbing / Descending Collapse
Following on from Tresco there’s a nice section of swims with short runs across Islands ending with a lovely swim across to St Martins and a nice exit up the boat slip. This Island is a lovely run around the coast path. We were out of sight from the team behind but they were running well and clawed us back arriving at the aid station before us. We collected the swim buoy we had to tow for the final 2.5k swim and ran to coast where we re-passed that team who were taking a long time to get ready for the swim.

We were told at the start to not go to the first buoy as it was too far right and that at the other side there as a small current so aim right. The swim was really good fun initially. We didn’t see anyone the whole time. So far across the kayakers starting telling us to aim right. I was already but it was becoming apparent the current was stronger than I’d interpreted the ‘small current’ to mean as by about 500m from the other side I was aiming 45 deg off line and only just staying on line for the shore. My arms were really starting to ache now and there wasn’t any tension on the tow line. I considered getting Andy to tow us in but managed to persuade myself to keep going. We exited with another mens team who we’d caught. I said to Andy “Thats the last thing we wanted to see; another mens team”. Luckily for us it became very apparent they were running a lot quicker than us.

Andy was now feeling good and started to give me a really good tow. We were moving well and definitely working the hardest we had on any run. We even had a bit of tow on the non technical downhills (Andy is a far far better downhill runner than me) and I must say it helped ! Looking back we couldn’t see anyone and after about 4k of towing we ended up running together. We then saw the a mens pair catching us. My first thought was “if they’ve caught us this much we’ve got no chance of holding them off” [looking at the splits we were 5 mins ahead at the final timing which means they caught us for 5 mins in 5k !!]. Andy had other ideas so we pushed a bit and when we got on the flat I started to two Andy. I got my second wind.  Despite pushing we could see they were catching and the last thing I wanted was a sprint finish. We passed Rachel, Lotte and Paul who cheered us on but not long after that we were spent and just admitted defeat. Eased off, congratulated Euan and James as they went by and then eased off to enjoy the final bit of the race. Ultimately we weren’t bothered. We’d raced really well and those that finish close to you are the racers you understand best as they’ve performed so similarly. You understand how well they’ve gone and they were running very well that late in the race.

Here’s a comparison to last year. As expected our swimming was much faster. We both felt we ran a lot better buts that not reflected in the times. 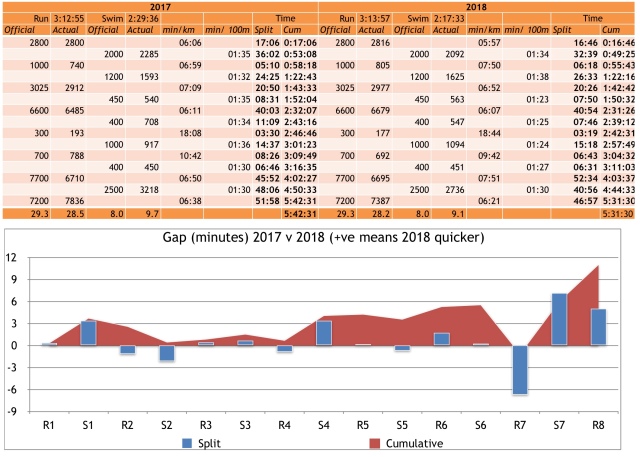