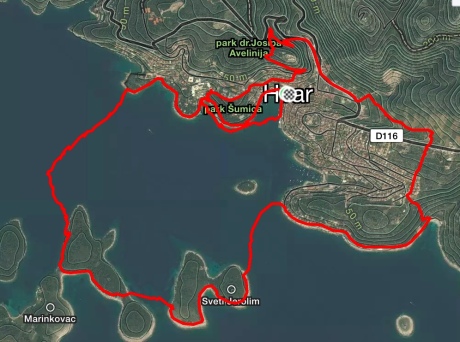 Long Report
At the race breifing a couple of hours before the start we were told that tow lines would not be allowed until the second swim as everyone would be too close and would get tangled up. This certainly helped Rachel lighten the load before the race as she told me she was now “bricking herself”. On the walk back to get ready we agreed that she should just hold my ankle with one hand and swim one handed.

We got ourselves sorted at our apartment and did a dry run on the flaw and quickly perfected the new, non tow line, tow technique. The sun was out at the start and we nicely warmed up prior to the gun. This was a step up from the sprint last year in The Scilly Isles where now one wanted to be at the front – most crowded forward but once the run went it soon spread out a little.

There was only about 200m before we jumped in off the quay. Hit the water. Breath straight out of me. A lot colder than I’d expected. By the time Rachel grabbed my ankle my breathing had calmed down. It was harder than towing but certainly quicker than not. Once used to the cold the water was beautiful. So clear. After a swim and a run we both felt calm and were thoroughly enjoying it.

After 1.7k was the longest swim of 1k. We’d been told there was a current from left to right so aim left. Looking at everyone ahead no one seemed to be so we soon were completely on our own. I could see other swimmers to me right but getting progressively further to my right. I was pretty sure of my line but the fact no one esle was with us got me increasingly questioning myself to the point halfway across I stopped and took goggles off for a proper look. It confirmed I’d got it right when I saw the marker buoy. However the others had drawn me off course and we had to turn in to the buoy. The map above showing out course clearly shows how the current swept us right. 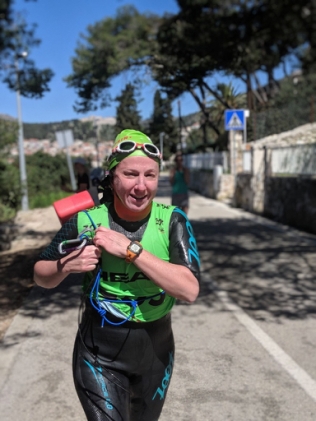 Next we had to cross a couple of Islands. This was a great intro to swim run as this section mimicked the swedish (now world champs) race as it was pretty trackless and hard going underfoot with a lot on the rocky showline. There was a lovely short sheltered swim between the islands before we crossed back the main island.

At the briefing he’d kind of implied the current was only really on the long swim but I guessed it would probably hit  this section as well so I aimed a little left. Halfway across it was clear I’d not aimed far enough as behind the marker flag there had been a white cross which I was sighting for but as we progressed the cross moved from being dead behind to being left. I kept compensating left but no where near enough as again can be ssen in the trace above. Andy and Lotte gave us a great cheer (and got some good photos).  They later told us how far off some people had gone with the current.

Now was the longest run so we took off hats but left wetsuits on. We kept the tow line on as there would be some uphills. We walked most of the uphill given the heat. It was lovely and not too tough going. It became shaded as we headed up to the castle. We noticed a mixed pair on the zig zags below us so we pushed on trying to keep far enough ahead that they couldn’t see us. Soon we were racing down to the shore again and the final swim around from the next bay in to Hvar. This hugged the coast line and was absolutely beautiful. We were well ahead of those behind and so was able to cruise and enjoy the final swim and run in to the finish.

It was a fun into to Swim Run. For a sprint I would say it was harder than Scilly Isles but no where near how tough Jersey was. That said if it had equivalently rough sea this course would be quite formidable. 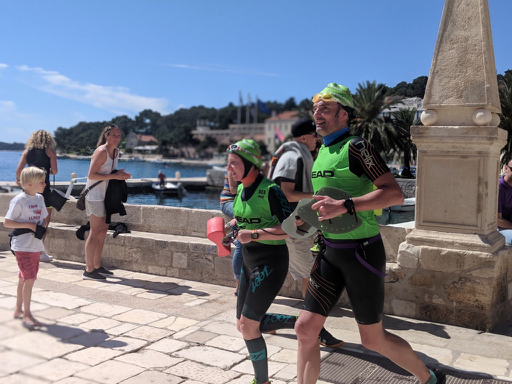 This entry was posted in Race Report and tagged Hvar, SwimRun. Bookmark the permalink.