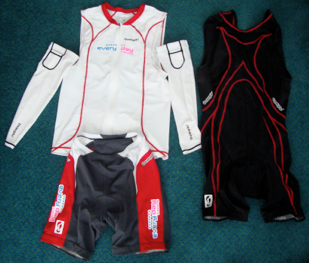 Today is my rest day so I decided to do a little test swim in my new Oomph! race kit. They’ve done me proud with a great two piece tri suit with the EverydayTraining logo on it. Some neat features are – it’s white !! It’s full zip and it has little pockets on the shoulder to put ice in ! Like the colours ! Also got some arm coolers which with a brief go yesterday proved very good – will test them out tomorrow on a slightly longer ride. Question is will they stay wet / damp between aid stations on the bike. Will definitely use them on the run but still undecided on the bike. I’ve also got a speedskin which I tested out with a short swim to the Coffees and Hawaii boat and back. It felt really nice on and super fast ! No immediate signs of major rubbing though the tops of shoulders will get a load of vaseline on. It’s par for the course with these skins for them to rub which I don’t believe is the suits fault it’s more the very salty water. Tomorrow I will swim half course in it. Overall very impressed with what I’ll be racing in – I’m not only going to look good but I’m also going to be helped to keep a little cooler out there. 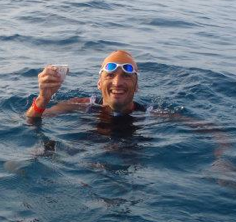 At the Coffee Boat I ended up chatting with Tim from Nuun for quite a while bobbing in the water. Nuun is a product I remember back when I did my first Kona – I believe it had just come out and it was just what I wanted – a non calorific electrolyte drink. I like to keep my calories separate from my water intake – this allows me to adjust each independently.

Back on dry land and little to do … so long breakfast, followed by sorting some emails, then phase 1 of the days sunning before a quick trip to the expo to grab my race day nutrion. Thanks to Jon at Powerbar for getting me on the team elite for this race. I was taken to a room behind their stand and it was a little Alladins cave of powerbar product. Going for a Vanilla, Strawberry and banana mix for race day. Was looking also for some “Ride Bars” but they didn’t have them – I grabbed a sample of a few products and now discover in the US they’re called “Triple Threat” … so may have to go back for some more !

I went to hang out with Roger at his rather posh hotel. He’d broken a spoke and had to go and collect the fixed wheel so I tagged along which was a great chance for a good old natter. Next up was meeting the troops for dinner in Humpys. Kalua Pork again – toptastic. All washed down with a couple of beers. I’m starting to worry I’m a bad influence as in past years I can only remember the odd occassion where someone at dinner has had a drink but so far this year more or less everyone has had a drink and the past two nights had two. We even joked about making a night of it and having shots … we resisted.

We did follow up with frozen yogurt made all the more exciting by the fact it was sold by weight.

It felt so late getting back to the hotel but it was only 8pm. It’s something very nice about Hawaii and I guess any place near the equator. It gets light and dark very quickly – light around 6am and dark around 6pm. It means by 8pm it feels very late and you’re heading to bed. I feel like I’m in rhythm with nature – tired when it’s dark and awake when it’s light. Probably the way it’s meant to be.

It’s getting close now and I can feel nerves in certain quiet moments but I’m keeping them in check. The feeling that I’m am going to enjoy this is helping a lot. I’m definitely here for the experience and plan to remind myself constantly through the day to look around, absorb, think how lucky I am to be here and absolutely bloody hammer !!

This entry was posted in 2011, Kona, Race Week and tagged Hawaii, Ironman, Kona. Bookmark the permalink.