As ever Epic Camp was an amazing experience. The phrase is normally “once in a lifetime” but since I’ve done four that’s not quite right. I feel lucky that I started Epic Camps whilst there were still a few to do. It’s a sad time to think they won’t happen again. My hope is that Jo and my camps provide something of the atmosphere for us in the future. 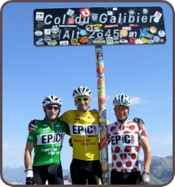 It absolutely shows that the correct environment is of huge importance when it comes to getting good training done. I came in to this camp with all time low levels of motivation but during the camp I became thoroughly motivated. Some of it remains as I sit here, nearly a week later, but much of that motivation is removed. It’s so much easier to train hard in such an environment.

I still find it a pleasant surprise just what my body can handle when I put my mind to it. I a firm believer in the central governor theory about fatigue. I was able to train hard every day of the camp and in fact got stronger but once the camp was over my fatigue hit hard. I have slept 10+ hours each night and rode part of the Ironman Wales course on Wednesday but early on in that ride i was hardly able to ascend pretty minor fields in my lowest gear. Scary how pathetic I was. Jo reminded me how after Epic Italy she was so exhausted she hardly did anything for three weeks through to Ironman Germany where she race awesomely. Me, I’ve been hit by the curse of the yellow everytime – not racing well post Epic having won the yellow.

This time I’m being quite careful and part of me is wondering whether too careful. Douglas’s parting comment to me was that I’d better race well at Wales otherwise there’d be questions to ask. He’s right my fitness came on so well during this camp. I came in to this camp genuinely less fit than previous camps. It was called sandbagging but it was the truth. That said part of me felt that coming in undertrained may be a good thing and several friends thought that also. The graph here shows various best powers each day verses my best in the past year. It can be seen that generally through the week I got stronger and by the final parts of the week I was regularly close to best every powers for 1 hr. What didn’t come back was the real strength I had in May / June this year where I was hitting some really good figures for 5 mins and below. My aerobic capacity is back and I ended the camp very optimistic about Ironman Wales. The big question really is have I done enough run training, the quality on Epic wasn’t great.

Winning the yellow again – I’m chuffed to bits. This time round I certainly don’t think the points paid to my strengths. There were few opportunities for swim sets and no straight swim competitions. There were few opportunities for bike tack ons and all competitions were being scored higher. Early in the camp I felt the competitions could be costly as I came in 5th in the Triathlon and only 6th on the first KOM. I wondered whether these sort of placing would be enough.

I find it interesting how you can downplay your own strengths and up play (is that a phrase) others strengths. Zach was clearly one of the stronger guys for the competitions and I wondered early on why he didn’t just tack on and he’d be on for yellow. Classic case of just assuming he could do what I could do (ie train more) but with hindsight I think he was playing his best game. In the final two days on the bike he really was suffering, if he’d done long runs early he could have suffered more. I seem able to recover overnight very quickly. I think that a big factor is the fact I’m not very muscular. I’m guessing it means I just have less muscle damage to deal with each night. I’m also able to work hard on a pretty full stomach which also perhaps helps. Later in the week I was clearly placing higher in the KOMs and in competitions which helped secure the yellow. Coming in to the yellow my aim had been to take extra points early and try and make everyone think it was out of reach. No idea whether that worked or whether most people just didn’t consider the few occassions where extra training was possible. I was the only person that did a long run, let alone two.

The camp itself was well put together. The routes were great and it was an awesome bunch of athletes. We had several strong riders which meant for the first time the scratch group was the biggest group each day. Other than the last day I wasn’t really strong enough for spending loads of time on the front. It was great to see Russ take this role and keep the peleton moving. At times I was dreading him going to the front. getting some of my own medicine of which I’m sure he’ll be proud. He did loads of work on the front for no real gain. It was appreciated but he certainly paid for it later in the camp with a noticeable drop in performance on the KOMs in the final two days.

This was probably the most sociable I’ve been on camps. I had booze I think every night. Never refusing wine with my meal and joining Scott regularly for post dinner beer. There were even a few occasions where I enjoyed a beer on my own whilst I blogged. I thoroughly enjoyed it.

A big part of me is so sad that this is the last Epic Camp. Everyone of them has been such good fun. I love the multi day, points based competition which can be found now here else. The camaraderie is awesome – the combination of looking out for each other as everyone gets tired together with the occasional ruthlessness of putting people to the sword when they’re tired is great. No mercy they say and no mercy is what you normally get and the whole experience is better for it. Completing these camps is made better because there is no easy way.

This entry was posted in Epic Camp, Epic France 2011 and tagged Alps, France. Bookmark the permalink.