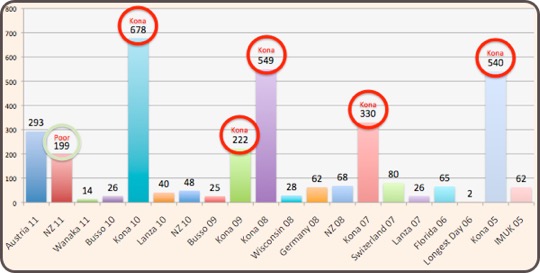 I must admit that my Austria bike split has been playing on my mind. Someone contacting me expressing similar concern and noting the amazing increase in sub 9 hours times over the past few years in M40-44 got me thinking a little more. Then the results came out in excel and the mathematician in me came out for a little analysis. It is very very unfortunate that my power meter dumped all the data as the key question in my mind is was that just a duff bike split from me. Was I just not fit enough to compete on the bike. My feeling coming in to the race and during the race is no. I had some best every power numbers in the previous months, I  felt I rode solid for most of the ride and I know my average power for ride was 244 watts. For comparison Busso last year was an average of 239 watts and Wanaka 236 watts. Remember these are averages exclusing zeros so direct comparison may not be appropriate. However, on the face of it my Austria ride looks pretty darn good by my standards.

So what happened ? Well, the pelotons which I saw and have talked about in my previous blog were the worst I’ve seen and really need sorting out before I come back to that race. I think fundamentally that race has way too many people in the race. 2,800 is going to cause problems.

Thats a distribution of the swim exit times. The final column is all those over 1:40. It shows numbers coming out of the swim every minute.  Between 0:58 and 1:13 over 1,000 athletes finished the swim. With a 10m draft zone plus bike length thats 11km on the rode if they were all legally and evenly paced. That first rider needs to do 44km/h for the first 15 minutes to be that far ahead of the last. Thats just for illustration as I know that with people making legal pass moves then the distance on the road isn’t that bad. However, there’s little hope of those thousand being legal for a good long while. That also requires a willingness to bust a gut to be legal and why should any of them sacrifice their race to be the one to do the right thing. It’s just not possible.

So what happened coming off the bike.

This graph shows time at bike exit in 2 minute buckets. You can see not long after me 45 people finished in 2 minutes of each other and after that for over an hour there were more than 30 people every two minutes. I think the graph above shows that with the best will in the world it would be very difficult for most people to ride this legally.

I’ve labelled where I finished. I also looked at a couple of brits I knew that had  great races. I spoke to Matt and he seemed to pretty much ride on his own and you can see he finished on his own. Nick flew by me towards the end of the bike and that group of 8 he was at the front off and most definitely picked them up in the last 20km as he had no one with him as he went by me. I point this out because it’s clear that amongst all this are guys that can genuinely ride these sort of bike splits.

I decided to look at the finish times and arbitrarily say that if the gap between two riders was 5s or more then it would constitute a separate group. On that criteria a total of 347 people (out of ~2,800) came in on their own.

This shows the number of people that finished in a group of a particular size. It means each number should be a multiple of the group size. So for instance there were 12 groups of 10, 2 of 15 and one of 37. It’s nice to note that over a third of the field finished in groups of 4 or less. Remember since I used 5s to split groups this doesn’t mean that any of these groups were illegal as 4s between bikes represents 10.8 km/h. 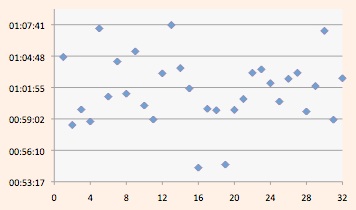 The single group of 32 interested me because it finished mere minutes after me (god knows what I would have said if it had swept by in the final few KMs). The average bike split was 4:51:47 and the 32 finished in a 36 second period. The scatter graph shows the distribution of their swim splits. All but about 5 of them finished the swim within 6 minutes of each other. I’ll be honest this doesn’t look too bad. Feasible this group could have slowly formed over the whole course of the ride and just come down the final fast 20 km section as a legal group.

Ultimately I think this has demonstrated to me that there are just too many athletes in this race. I think if the referees were told to enforce the rules then there would have to penalise a tonne of athletes who may well have been trying to ride legally. If they did start doing this it would be interesting to see how competitors would try and sort themselves out. People assume it’s the flat courses that cause the groups but I don’t now think that. Flat courses allow pace lines to work. A course like Austria causes a paceline to group up on climbs. Take a  legal pace line doing 43 km/h on the flat (for ease of the maths) – a 10m gap represents about a second. Hit a hill and drop to 20 km/h and suddenly all those 1 second gaps represent 5.5m and thus everyone would have to pass. It just doesn’t work.

It would work how it worked at my first UK Ironman or Half Ironman (I can’t remember which). They said if you got a drafting penalty on the bike you would find a load of tape wrapped around your T2 bag indicating you’d have to go to the penalty tent. If you’d had two drafting penalties you would get to T2 and find your T2 bag not there.

I wonder whether there are people out there who believe drafting is worth the risk and are safe in the knowledge that they’ll get one chance before disqualification and thus after the first penalty (if they’re unlucky enough to get one) they’d ride legally.

The great thing about this is that a referee would merely have to ride by groups to get them all worried. At the moment everyone knows if they got a penalty and they know it’s impractical for a ref to give a card to more than a couple in each group. With how I describe the ref could easily penalise the whole group and they just wouldn’t know till they got to T2.

Now … what about my bike split ? Looking at the image at the top of this post you can see all my Ironman bike split ranks. I’ve highlighted Kona. If you exclude these you see I’ve only been outside the top 80 bike splits on two occassions. These two occassions were my last two races. Of course this could indicate a drop in form but I don’t believe so. Ironman New Zealand was poor because not only my heart wasn’t in it (after the earthquake) but I also am convinced I got overly cold on the first lap (read my analysis of it here). It felt like a very very poor ride and I was 199. Here at Austria my split was even worse than that … I was 293rd.

I know how I rode that bike. I know how strong I was going in to that ride and I know I rode well. I’ve made my conclusions. I’m just pleased I wasn’t in need of a Kona slot.

This entry was posted in Race Review and tagged Austria, Drafting, Ironman. Bookmark the permalink.