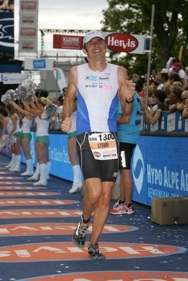 I’d heard a lot about this race and it was all good. I was looking forward to big crowds and german organisation. The days leading in to the event did not disappoint. Beautiful scenery, great weather and an awesome atmosphere at the race venue. The expo was enormous and they had a cafe come bar area where people hung out.

Bike check in was full sophistication with a chip in you wrist band and bike number. They then scanned them both and took a photo of me with my bike. On check out they all had to match !

Night before I had my usual disturbed nights sleep not getting more than about 30 minutes sleep between waking and checking my watch. I wasn’t as nervous as normal just excited. The hotel here has been superb and they got up to do full breakfast for us. It was nice sitting with about a dozen other athletes. I had – 3 cups coffee, one soft boiled egg, a plate of salami, ham, cheese, a bread roll with lots of butter. Finished with a banana, nutella and yogurt.  The hotel also put a bus on to get us to transition.

The transition here is about 1km from the swim so I quickly checked in my bike and headed over to the swim to relax. At the briefing they’d made a point of showing where the street wear bags had to go .., the map wasn’t very clear but I felt sure it would be near the swim. Luckily I asked as it was back outside where the briefing had taken place. Why didn’t they just say you drop them off at the same place as the briefing ?

I got in to my wetsuit early to ensure I could have a warm up and make sure I was front line for the start. As I walked back to the lake I had quite severe stomach cramps … no idea why and just chose to ignore them putting them down to nerves.

The course map showed that starting to the left gave the most direct line. So thats where I went and ended up next to Matt Molloy. We looked out trying to work out the swim buoys. Now … Triangle events put on this race and Ironman France. Jo said that at France the swim course was confusing and no buoys were put out before race morning.  Perhaps this is a feature of their races. At the briefing they showed the same map which indicated a dead straight course parallel to the piers and they said it would be obvious. Race morning we could see a BIG orange buoy bang in line with the map but also there small yellow buoys off to our right. We debated whether we had to go round them but they just looked like the many permanent buoys out there.  We decided straight for the orange one is what everyone would do. We doubted this when we noted no pros in front of us … they must be between the right two piers not the left ones. Nothing we could do now.

2,800 athletes are held on the beach and then with a minute to go we are let in the water supposedly, per the briefing, to amass at the line with the threat of disqualification if we pass it. Luckily I’d been warned and I got in and swam keeping up with the fastest swimmers. A guy to my left stopped at the line but I could see no-one to the right was stopping so I kept going.

Soon I had clear water and could see I was in line with the leaders from the other start section. Then the kayaker kept whistling, I looked up but no indication. He edged me over. Bugger have to go round those damn yellow buoys. So … the race maps were completely misleading.

It was made even worse by so many boats being out and not being kept out of line with the buoys so half the time you couldn’t see the buoy for boats. At that buoy we merged with the other pack a fair way back and spent the next 1.5km to the final turn buoy working through theses swimmers to get towards the front. A real pain. Turning the Orange first buoy we’re looking for the orange second buoy … no nothing as sensible as that, this ones nice and blue. Then turn and head for the canal, straight in to the sun. I just had to trust the guys ahead were going the right way as I couldn’t distinguish anything. The canal section was a lovely section of swimming. Given all the faff I was chuffed to bits with 50 minutes and a very comfortable swim. Reckon if I started in the optimum place would have been close to sub 50.

The transition is now quite long. My helper in the tent wasn’t really helping rather getting in the way. Including a bizarre moment where I went to grab my helmet, he did as well and he wouldn’t leave go. WEIRD. I grabbed my bike and zig zagged through the massive car park transition area.

Ran out looking for the mount line which didn’t appear to have been sprayed (other athletes commented they reckoned is was sprayed on whilst we were out on the bike) so I kept running towards this big inflatable arch thinking that must be it. Luckily a spectator screamed “get on your bike” ! Really this was not the germanic organisation I was expecting.

The first section of the bike is rolling along the lake side. I felt full of beans and got in to my groove unconcerned with the 154 HR and 260+ power figures I was seeing. Tom Lowe went by at unbelievable speed at about 15km. The support up the hill to Egg was so good I was beaming and choking up. Similar up to the high point Rupertiberg. Then coming down from there and over the next few undulations I was swept up by a large peleton. 2 or 3 across, a metre or two between bikes… I’ve seen worse organised group rides. It was an utter disgrace and I shouted at them stuff like “this is ridiculous, you’re all drafting” … think I may have used my exotic language though. Then I saw coming along behind a car all branded up with “Karnten Ironman Austria”. I gesticulated to the passenger that this was a peleton and all he did was shrugged. To make matters worse I then saw a marshall come by, ride alongside the peleton and do nothing. He should be ashamed of himself.

I must admit I lost my focus a bit here. I thought to myself how this sort of things spoils the race. I cruised back in to the turn around and saw 2:26 on my clock. Still on for a low 2:50s ride … god knows what time that peleton was on for. Back out around the lake I was in a nicely paced line with two other people. I really enjoyed it. Easy to keep legal, no one around and they were keeping a good easy pace. I certainly rode that bit more appropriately than the first time. I was preparing to have more to give on the hills. Then the second peleton came by – bigger than the previous and again they had a marshall in tow who did absolutely nothing. I couldn’t believe what I was seeing. What goes through these guys minds. They can’t think they’re not cheating surely. Perhaps they just decided may as well join them because if you don’t whats happened to me will happen to them. You let them go, get another 40km riding on your won or in a small pace line before the next peleton rocks up. When I look at the number of guys low 4:50s and below I now just assume they rode in a group based on what I saw. Once this one went by I did the little out and back section and didn’t see anyone coming up behind demonstrating how that peleton had just collected all the riders together.

I started to feel strong again and was able to push hard up the final couple of climbs and break away from the two people I’d been pacing with till then. I got back to transition in just under 5 hours and new with the longer transition that getting my PB would be a big ask. Matters weren’t helped by needing a rather long pee in T2.

Vibrams on and out on to the run. The focus initially was to run comfortably and relaxed. I did this and was seeing 4:30s per KM. I felt good, my heart rate was just below MAF and it felt pretty comfortable. It wasn’t too fast and I thought there was an outside chance I could maintain it and thus get a PB. Each time I crossed a timing mat I was imagining Jo’s reaction back home. I was running well. I was starting to run how I really believed could since I changed my technique back in December. At 25km I was still on 3:15 pace (which would get me home in 9:13) when an aged american dude was heard to say “I wouldn’t run in those shoes if my life depended on it”. Apart from thinking what an arse to say such a thing as a spectator I also thought “I’m running 3:15 pace in these shoes so they can’t be all bad”. At 27km I started to suffer so I took the Lanzarote super caffeine guana mix which Paul T put me on to.  I’d been having a gel at every aid station so didn’t believe it was lack of fuel. Kept at it and was encouraged that despite feeling I was falling apart my splits only dropped to around the 5 min/k mark with the slowest 5:03.  I ran through town and rang the bell (for charity – 1 euro per ring) both ways again. 5k to go and sub 5 min Ks all the way home would get sub 9:20. At Busselton I’d done 9:20 and remember feeling slightly gutted not to go under. This helped me push and it was great to be able to raise my pace in the latter stages and knock out several 4:45ish KMs to get home in 9:19:17.

That run felt like a breakthrough and I was absolutely chuffed to bits.

As for the race – great location, great course, great support but those peletons on the bike mean I’m unlikely to return. Some people may think – come back, risk sitting in a peleton and get a monster PB but for me it just wouldn’t count… and I’d know.

This entry was posted in Race Report and tagged Austria, Ironman. Bookmark the permalink.