Getting Ready For Austria 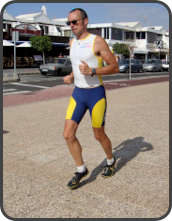 First up a response to the second comment on my last entry. I don’t have any current footage of me running, if it’s of interest I will sort some. Anyway, when I decided to try and sort my running out Jo took some initial footage of me using my iPhone for Helen Privett to take a look at. This is the first video here [videos can be seen in original blog post here]. If you slow mo it you can see how I heel strike and then slap my forefoot down – you could really hear it. No idea whether I’ve always run like this or just since my surgery. I did run two Ironman marathons in vibrams running like this achieving a 3:36 at Busso and also achieving unbelievable calf cramp.

The second video was taken a couple of weeks after making the change over following Helen’s instruction. I’m still at the stage where I forcing the forefoot strike but I am landing forefoot.

Six weeks after the change I raced Wanaka and ran strong (even split) for a 3:42. For me a few things stood out that absolutely convinced me this was the right way to run

Since then Helen has continued to help me and I’ve grown more relaxed with my running. I don’t have to think so much, I feel relaxed, I’m running faster and just plain enjoying running so much more.

This leads quite nicely into the theme of this post which is a review of how my preparations are going for Ironman Austria. I will start with the run. 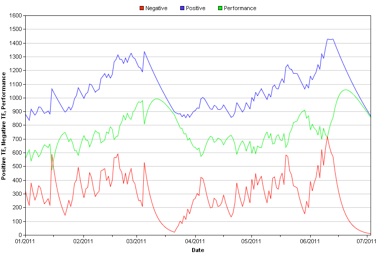 The graphs show my performance chart going from the start of the year through to Ironman Austria race day excluding forecast (ie future planned sessions). The big drop in the middle is my end of season break after Ironman New Zealand.

I really feel my running has started to come together in the past few weeks. I’m feeling strong and relaxed and finding that my pace during runs naturally settles at just under 5 min / k pace. By this I mean that if I’m not consciously pushing after a few KM I find this is where my pace is. It’s starting to feel pretty relaxed at that pace. For me this is a pretty critical pace to gauge since I feel it’s the likely place I’ll settle in to in an Ironman if my mind wanders. I want this default pace to be as quick as possible. At the moment just under 5 min/k is pretty pleasing. When I chose to push the pace I’m able to hold the pace in the 4:20s for quite a few KM. I certainly want this faster, but as I said in the previous post I’m happy to be patient and not push for the improvements. I am getting quicker and I’m enjoying it.

Since getting back in to training my focus has been my run. It’s the clear weakness in my performances for the past two years. Initially this focus did not really impact my other training within my 100 hour cap since my mileage hasn’t built up however it’s impacting a little more now as I’m gaining confidence and strength. Last week I did my first 50+ mile week in ages. The main goal has been my long run each week. It’s had priority which means I’ll even sacrifice my morning swim if I need the sleep ahead of it. My aim with all my runs is to speed up through the run. I wanting to get used to pushing my running when I’m tired. I also cut runs short if I’m not running at appropriate pace. I’ll rarely now just keep running if I’m just running slow, I’ll shorten my route. I don’t want my body to recognise slow as an acceptable pace. Slow is, of course, relative. My slow is above 5:30s … in the future I hope it’ll be 5:00 or perhaps quicker ( if you see what I mean).

Last friday night I jogged to and from a late squad session. I was just jogging nice and easy purely as a means of transport. I was running 5:10s … so chuffed.

I’m quietly getting quite excited about the run at Austria. That said there’s also caution as I’ve felt this before and ended up running crap. 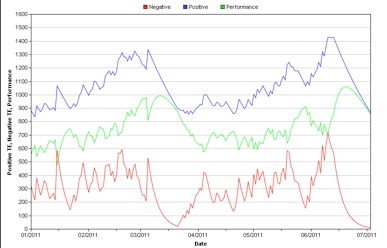 Biking has been fun. I’ve been doing less and that has clearly put doubts in my mind. I still have hangovers to the 500 mile weeks I used to regularly do. I have to keep trusting myself when I chose not to ride but the evidence is there even if I keep questioning myself.  In general I’m riding better each ride – by better I mean holding higher powers. It’s fun to be able to hammer up climbs. This Saturday was a case in point. I headed out my our housemate  Alex for the first hour. He had an easy ride so we rode an hour, had coffee and then went out separate ways. I then cranked it up and ended up with a 100 mile ride at a normalized power of 232 watts. I felt good. In the past I don’t think I’d ever have done such long hard rides.

Despite all this my lack of miles and lack of overdistance miles is still a concern. At Wimbleball this weekend I intend to test it out. Following Austria I am planning to treat myself to some big back to back ride days in preparation for Epic France.

Swimming has become really fun again. I’m now training with Taunton Dean Swimming Club which not only gives me access to lots of squad swimming with some pretty fast swimmers but also their head coach Graham Davidson is proving excellent. Finally I think I may be getting rid of my weird slapping right arm entry. He’s also go me focussing all the time on my stroke count. It’s exciting feeling that I may improve my swimming further. I also now swim at the Tri Squad on Friday nights. At last one I wore drag shorts and through the main set there were four lots of 100m at max effort. I managed them all in 1:10. Very chuffed.

Overall I have mixed feelings. I’m not doing what I’ve done in the past ahead of an Ironman so I feel unprepared however, the optimist in me keeps telling me there are signs I’m pretty fit.

To end I must say how much I’ve been enthralled by the Decaman that unfolded last week. I was very interested as I’d seriously considered entering it. In fact, Jo was super keen for me to do it and we even had an agreed time at Busselton which had I beaten I would have entered ( I was 20 minutes off !). Those guys are inspirational. It seems the course was pretty hard and looking at the consistency of the winner and his times certainly made me reframe the challenge in my mind. If I’d done it this year I would definitely have underestimated it.