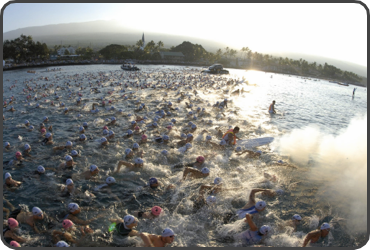 It’s that time of year when I do a review of each discipline and consider changes for next year. It’s been a pretty good and consistent year with my swim performances at Ironman: 51:19 (NZ), 52:31 (Lanza), 57:39 (Kona) and 50:21 (Busso). I also did a 56:36 4k at the European Long Course in June. Kona rather sticks out but it’s generally a slow swim and is non wetsuit. It still would be nice to manage sub 55 there but that would require big improvements in my swim fitness if I am to do it without busting a gut.

Lets look at a few stats.

So far I’ve swum 621km this year. By year end it will be around the 650km. This makes it my second biggest swim year only being beaten last year. The average weekly swim distance is 13.9km and the average length of a session was 4.3km.

Given the overall consistency of those swims it’s interesting to see that my training approach has varied quite a lot through the year.

Leading in to New Zealand I was training regularly with the squad in Christchurch. Not only getting some very hard sessions done but normally over 15k a week with many over 20k. This lead to a very good swim on what tends to be a fast course but swimming in a small pack.

I had an ease off from swimming ahead of going to Lanzarote where I then hit the swimming hard. A 30+k week in Club La Santa but other than that all open water swimming. Virtually none of this swimming involved formal main sets. Generally it was long steady state efforts.  Following this I managed a great swim at Lanzarote which i think tends to be a slightly slow swim.

Ahead of Kona we moved to Taunton and weren’t able to get in the squad there. So instead I was training in the public sessions and felt it was less disruptive to just swim continuously. I did lots of steady state 4ks. Six out of eight weeks of build I did over 20k with the other two over 15k. Lots of steady state swimming. I had the most comfortable Kona swim.

Then leading in to Busso with my new approach I really reduced my swimming but very session was super focussed. If I didn’t feel I’d be able to execute a session at appropriate pace I wouldn’t do it. I was doing 3 sessions a week and no more than 12k in total but big chunks were at Ironman pace or above. I had a great swim at Busso.

The only below par swim was the ETU but it was still good. I was first out of the water, I swam on my own and it was comfortable. But 57 minutes isn’t great however given my bike and run following it was perhaps appropriate pace. The graph shows I did very little swim training in to this race.

Very pleased with this years swimming. It’s shown a variety of approaches can produce a good result. It was reassuring to see I swam well at Kona despite a whole summer without a squad to swim with. Next year I will continue trying to establish just how little time I can spend on my swimming and maintain my current form.

This entry was posted in Training Review and tagged Swim. Bookmark the permalink.