Is Kona Really The World Championships? 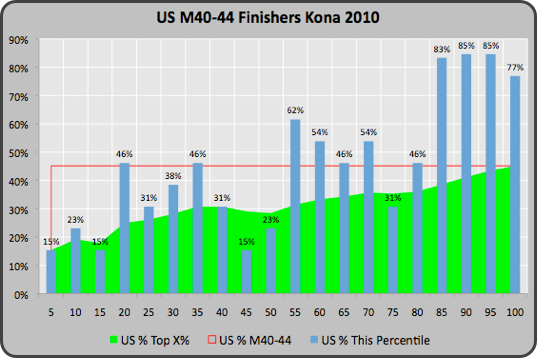 Currently I think it is but I think it could be under threat. Unlike most World Championships where countries send teams and they decide on selection, Kona is the culmination of a private, for profit, race series. Entry into the qualifying races is first come first served and as such the best people potentially may not even get to the start line. The validity of it being thought a world championship is purely down to the best people turning up. Currently I believe it is and in terms of just competing I would say it’s far harder to qualify for, in the UK, than any ITU World Champs.

There’re a few things recently that got me thinking about this:

This final point kicked my arse in to gear to do some analysis I’d thought about doing. It resulted in the above graph. Each time I’ve been to Kona and they’ve stated the stats about number of Americans and then they go in to number from each state. You’re calling this a World Championship so why are you telling us about individual US states. The audience cheers when you find that 45% of the field is US and when you find that California has more than any other country you get another cheer. This give a false impression as of course there’s a cheer: 45% of the audience are american. The rest of us are thinking – if this is a world championship then it’s not something to be proud of to see how skewed it is.

So I took a look at the details. In my age group M40-44 45% were American. However – if you look at the top 50% of finishers only 28% of finishers are US. This means the bottom 50% is 62% american. If you look at my graph of those finishers in the 80th to 95th percentile of finishers a whopping ~84% were american. Now this is almost certainly influenced by the lottery where 75% of slots were only open to US Citizens which, thankfully, has been changed this year but still confirms what I always believed and experienced that it’s easier to qualify at US races. It also shows that the skew towards US is actually lowering the standard of the overall race. If you finish in the top 25% possibly top 50% your position is probably a fair reflection of your position in the World but below that I reckon you run the risk of getting your ass kicked by some European that didn’t manage to qualify.

Why is this ? It’s pretty clear that the sport is US centric – loads of new races there. Not only that, but new races in the US are getting 65 slots (eg Texas, St George) whereas new races elsewhere are getting 50 (eg Wales, Regensburg). Also, non American races appear to be getting slots cut – New Zealand had 80 slots in 2008 when I first did it, this year they have 60. Germany had 125 in 2008 but are down to 100 now. 125 is hell of a lot and resulted in 25 in my age group but it certainly didn’t make qualification easy still requiring sub 9:30 to get a slot. Switzerland I remember having 60 in 2007 and now is 50. UK bucks the trend moving to 50 next year from 30.

The biggest proportion of slots are in the US and they have many races with a high number of slots. Looking at the table on the right we see 42% of slots (excluding Lottery Slots) are allocated to American races. To make matters worse they have a ridiculous entry system which more or less excludes non americans. If you can enter the day after the race at the venue in priority to those online then it’s going to prove very difficult for non americans to enter.

My feeling is the effect of this entry procedure is that though the cutting edge of each age group is a high standard the standard falls quickly (there isn’t the depth of field). That combined with the races having more slots results in easier qualification. I advise my athletes that if they’re really keen to qualify they should make every effort to get in a US race. My experience is that qualification has been easier when I’ve gone to the US to do it.

[I should say here as an aside that I don’t know how slots are allocated to races. My gut says the races buy them which would mean it’s not strictly the WTCs “fault” but if races buy the right to have qualification slots for the “World” championships surely that just undermines even further the right of Kona to be a World Champs.]

What can be done ? I see a couple of things. Either / or both would help:

The other issue I see becoming more prevalent is something that women and those in the very old or very young ages groups already suffer from and thats the rather random nature of qualifying. If there is only one slot in your age group for a race then all it takes is one superstar to turn up and you’re out of luck. You could be top 5 at Kona one year and fail to qualify the next if you’re chosen race has one of those 4 head of you there or some new unknown fast person.

Does this happen ? Certainly. The first year Jo tried to qualify she did Lanzarote as her first race. Only one slot and knowing this randomness she felt that her second race Switzerland was the more likely place to qualify as there would be two, possibly three slots. At Lanzarote Jo won and got the only slot. Who was in 2nd ? Only the girl that had come 5th at Kona the previous year. So that years Kona almost certainly was missing one of it’s best performers in that age group just out of randomness of the selection process which undermined that age group being the “World Champs”.

As more Ironman branded races are introduced the number of slots will be spread thinner and thinner and this randomness (or luck) of qualification will increase and become more apparent in all age groups. I’ve been lucky, being in the biggest male age group most of the time provided I select a race with a reasonable number of slots then the averages work out and prediction of qualification times are generally pretty close.

What is a solution to this ?

I feel that they should reduce the number of races that you can qualify from and thus increase the number of slots at those races. There would need to be a method in place to ensure that competitive age groupers could get in to these races. Perhaps some sort of good for age giving priority into the race (I will discuss good for age later). At the qualifying races entries could be opened first to those that meet the good for age criteria then open to any. It does mean first time Ironman would not have a good for age time and would either get an entry as a non good for ager or could enter another race to get a time. Just like getting in to the London Marathon.

Establishing what good for age is would be tricky but not insurmountable. A possible approach:

I feel coming up with a workable solution for good for age is just a matter of spending time analysing the finish times across races to come up with an approach. The practicality of checking people meet the criteria really just requires  some standardisation of results and how to reference athletes. You could give each athlete a unique ID when they enter their first Ironman event which would mean finding their results and checking if they are good for age would be trivial and could be automated.

Part of me feels it’ll be a real shame to complicate the whole system (it’s nice and simple right now) but to maintain Kona as a World Championship changes such as this may be required.

This hits on the problem of a World Championship being run for profit. The motivation of the WTC is not to make the World Championship legitimate and competitive but to make money.  The current system of entry ensures they have the full entry fees sitting in a bank account a year ahead of the race and I would imagine months ahead of the first major expenses for the race. The spreading thin of the slots also means that many age groupers that are keen to qualify but aren’t superstars for their age end up entering multiple M-dot races to the exclusion of other race series (eg me!).

Having said all this I still believe Kona is a genuine World Champs – at the top end of the field it is highly competitive and top 20 at Kona is an awesome achievement. The expansion of races, the change of Pro qualification and the continued (and increasingly) US centric nature of the series just makes me worried that they’re slowly eroding Kona’s credibility. This is coming from someone that absolutely loves the Kona experience and can’t get enough of it !

The ITU World Long Course is the genuine World Champs in that national teams are entered and national bodies select but it’s not really viewed as a World Championship since participation is so low. If it were an Olympic event it would be taken more seriously and I  sometimes wonder whether that would give it more credibility with age groupers or would the pull of Kona and Hawaii being where it started mean it remained the pinnacle for age groupers? Similarly with the growth of Challenge and other Series, if they introduce their own “Series Final” (perhaps also calling it a World Championship) it will force people to chose perhaps diluting the talent choosing Ironman perhaps resulting in Kona being a “Series Final” rather than a World Championship.

This entry was posted in Qualification and tagged Ironman, Kona. Bookmark the permalink.