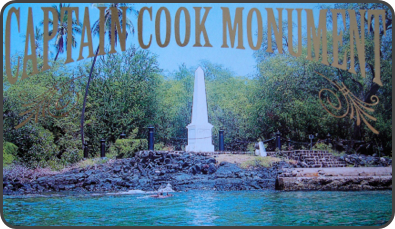 Finally Lava Java feels like a civilised place to hang out. It’s the Thursday after the race and things are really starting to settle down. It’s noticeable how much friendlier staff in restaurants and cafes are now. I’m guessing it’s nice for them not to be rushed off their feet.

Todays photo is of Captain Cooks monument. After 5 visits I’ve finally managed to visit the sister monument to the one that dominates the skyline where I’m from. I’ve done innumerable long fell runs to the one back home so it was apt that we did a pretty solid swim to see this one. On Tuesday Richard, Jenny, Rachel, John, Jo and myself had a little expedition to swim the mile or so across the bay to Captain Cooks monument. Getting in from the rocky shore through the breakers looked far more intimidating than it was. The swim turned out to be harder than it looked. It was great though and I felt strong swimming.

Today I finally got back in to a little exercise with a 20 minute swim first thing and a nice steady ride for just under a couple of hours. Sods law I felt great on my ride today. Didn’t feel I was pushing it, just cruising along and I had a normalised power of 190 watts. Just adds weight in my mind that Saturday was just one of those days.

I’ve been thinking a lot about my performance and I clearly see it as my most disappointing performance here yet. I felt I’d really put the work in. Admittedly I didn’t feel on fire in the final week but with the work I’d done I thought I’d be alright. Heading out on the bike in the best frame of mind I’ve been in at that point in this race so I don’t think it’s I just wasn’t ready to race. I almost feel embarrassed that I put all this work in and get such a crap performance.

Not sure how organised these thoughts will be but here they are:

My build to this race was rather like an experiment brought about by circumstance. We didn’t get access to a squad in Taunton (thats another story) so Jo and I were training on our own in the public pool. We got to know the locals and they were very good and considerate in trying to keep out of our way. I manage to swim most mornings and consistently got 20k a week in. It also allowed me to be a guinea pig on a little theory I’d had about swim training. Everyone believes that swimming hard intervals is the right approach to getting strong for swimming in Triathlon. I wondered whether this was really the case, especially for Ironman. My thinking was:

I wondered whether the actual best approach, provided the athletes was disciplined enough was regular long continuous steady to hard swimming. This made sense on many fronts

Now, don’t get me wrong … if I have a squad I will attend as I love it BUT I think adding in long steady swimming is good.

So back to Taunton pool. I was by far the fastest in the lane and I find that if I do a continuous swim it’s easier for the others in the lane. They tend to be able to judge when I’ll pass etc… So my sessions were one of a few types:

Given my swim on Saturday – it’s the strongest I’ve swam and the easiest I’ve swam at Kona. Though it’s 2 minutes off my best, given the lack of swim skins and the ease of my swim I would rank it as my best swim. I am very pleased with this.

God knows what happened. I just did not have it at all. I’ve really no idea why. One thought is I was just plain depleted. It felt like two years ago when I’d done Wisconsin 5 weeks before. Perhaps I just hadn’t recovered enough. This however, doesn’t fit with other races where I’ve done similar volumes / work up to the race and been on fire on the bike. For now I just wonder whether I had some sort of bug. Not bad enough to make me feel ill but enough to stop me being able to raise my HR.

What an experience running in Vibrams. It certainly gave my feet a workout and if I’m honest I’d underestimated just what it would be like. That said I still find it bizarre how people want to blame the vibrams. From what I can see a huge proportion of people get blisters that they don’t normally get during this race but no one says to them you better change from running in trainers and start running in vibrams, dunlop green flash or whatever. Having said that, I’m not normally one to really get blisters bad when running in flats. I sometimes do and sometimes don’t. I think Jo had a feeling of “Welcome to my world” as she always has trashed feet at the end. So what could have caused it. In order of likelihood here’s what I reckon and how I’d address it in future:

I learnt a lot from this experience. It was never about running the fastest Ironman Marathon. In the run up I probably still felt that I’d run quicker in racing flats. Though I told everyone it wasn’t wise to change as I’d only run in vibrams that explanation was really just to avoid a load of quizzing. Thats the advice everyone is given and everyone believes without thinking. I could have raced in flats without any problems I am sure. Why didn’t I ? The move to barefoot is a long term plan that will take time to really reap the rewards. I fundamentally believe in it but also understand, like a training plan, you need to give it time to come to fruition. You need to back yourself and your beliefs. This race was a key stepping stone. I had to see what it was like. Everyone that has done a marathon has a first one, it’s a first time they’ve ran that distance in whatever shoes they chose to run it in. This isn’t anything special, it just happens the first time I’ve run a marathon in vibrams isn’t my first marathon. Having done it once I believe I will be a lot better equipped next time.