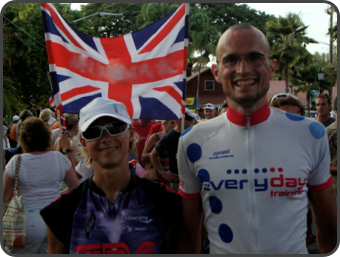 It’s hotting up in Kona now with the formalities starting. This evening was The Parade of Nations. An event that I always attend and encourage other athletes to come to. The locals come out and cheer and seem generally pleased to have us in town. We take over the place and I feel should say thanks and show our respect by turning up and supporting this. It’s always a nice way to meet the other GB athletes which is real nice. It ends by filing us all in to the Expo – a not very subtle ploy really and one we normally avoid by heading straight to dinner but this time we were keen to see Chris on the QR stand so we went in … unfortunately he was just coming from the airport. The place was heaving. Quintana Roo had a cool prototype bike that only had the drive side seat stay…. I should have got a photo… perhaps tomorrow.

Really starting to wind down today. I got up and went down for a swim but wasn’t feeling that motivated however the Coffees of Hawaii boat was out so I decided to just swim out for a coffee. I felt good swimming and was glad I went. I said hi and Albert and had a lovely piping hot coffee. Lots of chatting with folks, a relaxed coffee before meeting Jo and Douglas in Tantes for a long slow breakfast. It’s nice not having much to do.

Jo and I went out along the  Queen K with Richard to get some photos of us on our Quintana Roo’s. Not seen the shots yet but reckon there should be some good ones. I then did a quick blast along the Queen K. I bumped in to Stephen Moore early on and we had an enjoyable hour or so ride chatting along. My average power was over 200 watts and it felt pretty easy – very encouraging.

Decided against running today and will that tomorrow.

The bike set up feels pretty good now. I’ve put the Speedfill on so I can still drink if the wind is strong. The only dilemma now is the swim. I’d rather decided on swimming in Tri Shorts only but then I heard that Blue Seventy may be doing a exchange deal on the old suits so I got my house mate to send mine out. it’s not arrived yet… so it may not be an option but am wondering about wearing a speedsuit. Seeing how quick Russ and Roger seem to be in them compared with out I feel there’s an advantage. However, during the parade I was chatting with Carl Greene and he has one and has done a test in a pool and reckoned he was 1s per 100m quicker but it really cut him so he think’s he probably won’t  wear it in the race. Thats what I want to hear as I’ll be a lot more comfortable just swimming in Tri Shorts.

This entry was posted in 2010, Kona, Race Week and tagged Hawaii, Ironman, Kona. Bookmark the permalink.