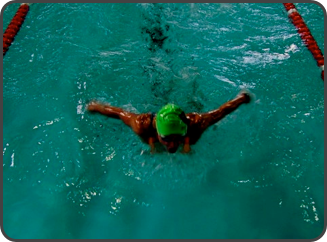 We’re in Masterton this evening with one day before we finish the North Island. Another storming day. The highlight was at the swim this morning. Look at the picture above does that or does that not look like a proper fly swimmer ? Thats Jo about 149m into her 200m fly.  The first time she’s completed 200 fly continuously !

The swim this morning was a success for me as well completing 10 x 200m on 2:45. I’d be happy with that in a regular training week sitting in the draft let alone leading the lane on the 7th day of Epic Camp. Pleased I continue to do the gentlemanly thing ;o) in pursuit of the yellow jersey by letting Gordo wear his Blue Seventy and towing him and Petro through the set. Must admit though doing this sort of thing together is what really makes this sort of camp. At the end we’re all so pleased with what we’ve done. It’s a bonding thing ;O). I was impressed with Petro’s swimming since the other day he dropped off when we did the 3k straight in 42 minutes. I really didn’t think he’d manage it. Was pleased with my pacing – I kept them all 2:39 / 2:40 which helped keep us all together. TOUGH session. If the yellow comes down to a single point perhaps I’ll regret being the nice guy … probably not.

Today was the longest day of riding. What an awesome day it was, especially the second half. I’d decided that today should be an attempt at recovery and I fully intended to stick with the last group but not do any big pulls other than my fair share if we were sharing the load.

Someone must have spiked John’s breakfast as he went to the front and pulled us along at a nice old pace. It was nice sitting in but we were certainly making good progress. He needed a loo stop and right by where we stopped was a coffee shack and Gordo got the coffees in. It felt like a proper ride. John then continued to pull us to the first feed station. All the way I had this big rattle but a couldn’t figure out what it was. As we left the feed stop I noticed my front quick release skewer was almost fully released !

After the stop the fun started. Firstly there was a substantial climb that no one expected. At the top both Petro and Clas wanted to get a photo, there was a slight ease up in the pace but not much. Daniel absolutely flew down the hill and once on the flat didn’t let up. As Clas said he maintained his momentum for about 20k. I was a ways behind and had to get down on my aero bars in my top gear and go on the rivet for a couple of minutes to get back on behind Daniel and Clas. Gordo and Scott got back on and Daniel just kept going and going. Eventually John came back and went straight throught – game on. What fun !

We turned and found there was 25k to lunch so we each took turns doing decent pulls in to the wind. Had a leisurely lunch but it was a full 20 minutes before Petro turned up. I think he’d not had a map and went a little wrong. He wasn’t a happy camper but think he managed to take the banter in good humour. I was imagining his lovely photo from the top with a road going off in to the distance with us guys racing along it. [ just had Daniel and Pete come in to do a a video interview with Tara – could be interesting … I’ll try not to get distracted]

After lunch I completely threw out the idea of keeping it easy. I caught up the the guys and saw Clas up ahead so TT’d by them and got on his wheel. Before I know I’m hammering along on the TT bars along this awesome road. Spinning out my top gear on certain sections. Clas sitting there telling me I can do what I want. Asking if I’m feeling strong and finally saying he is getting fit. I was on a mission, he’d mentioned last night about how the 200k ride today would take at least 6 hours and I was determined to get under 6. We got in in 5:53 for the 201k (~34.2kph!). Clas said when he writes his race report or his sub 8:10 Ironman he will mention this !

We’re a week in … here are my totals so far:

This entry was posted in Epic Camp, Epic End To End NZ 10 and tagged New Zealand. Bookmark the permalink.