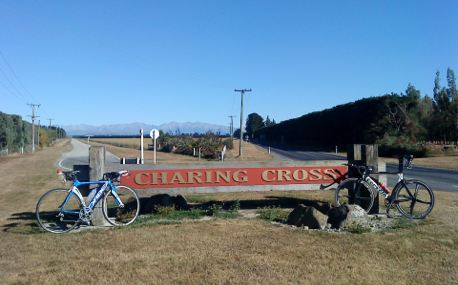 The photo above is of Jo and my bikes at Charing Cross. On the map this stands out because 8 dead straight roads all meet here. On arrival you find that all there is is this sign. Dead flat all around and you just look down seemingly endless roads in all directions. It made us chuckle to arrive here and set up this photo. It was also in line with something Scott said to me on yesterdays ride. I’d told him how I’d been enjoying getting out on the bike everyday and I was starting to feel fit. He said that was a great way to get fit – just get a map, head out riding long and exploring everyday. Thats just what we did today.

It’s been a great weeks training. One where I’ve felt I’ve been balancing overloading my aerobic system and getting recovered. It’s been big but mixed with harder / easier days. I thought I’d give full details:

As is our routine now on Mon, tues, thurs and fridays our alarm goes off at 5:20am for the 2.5 mile run to the QEII centre for the 6am swim session. We wait outside with all the regulars for the doors to open and then rush to get changed to try and be starting the session by 6.10am at the latest. Rolly sets some tough sessions – in general it’s about a 700m warm up (all strokes), then a 4+k main set and finally about 300m swim down. This morning was no exception. Completed a 5k main set ran the 2.5 miles home for a whopping omelette breakfast. Riding alone today so decide to just head north. Went up over Weka Pass ( it wasn’t much of a pass) getting to the edge of Balmoral Forest before retracing my steps. I took this photo 50 miles north of Christchurch. Ended with a 108 mile ride and then  I ran 4 miles off the bike.

It had been a pretty tough previous few days so took it a little easier today. Ran to and from the swim session. Another 5k session. I chilled out in the morning working on my training diary. At lunchtime I went to the bike shop for Cameron to take a look at my bike. I sat in the workshop drinking coffee and chating for 90 minutes whilst he stripped my headset and tried to figure out what was making my front wheel squeak and click. No real solution yet. I then headed out round the airport and just TT’d around for 52 miles. Had a break and then ran 5 miles to Brighton for a picnic with Jo. We also had a few beers.

No swim session so had a bit of a sleep in before heading off to meet Scott. We headed south of Christchurch for some flat riding. Scott showed us some great roads. Jo had some intervals to do so Scott and I just cruised along behind whilst she did them and we all chatted during the rests. I tagged on a further 50 miles or so to get a 138 mile ride. I ran straight off the bike. Jo and I headed off together for the first 10 minutes before going out separate ways as Jo wanted to do a tempo run. I headed into the forest and started to feel great, like I could run forever. I ended up on the beach which was lovely to run along and it just appears empty and endless in both directions. Before I knew it I’d ran for 47 minutes and I turned back and retraced my steps. Ended up with a good paced 95 minute run.

Run to and from a tough 5k swim session. Large breakie then out on the bike with Jo. We both felt quite tired from the previous day so we headed out to explore the flat roads south that Scott had showed us. We stopped twice in the first couple of hours and not long after that we stopped for some lunch. Nice, social and relaxing. Really good fun. Post lunch we managed to change this. We headed over Gebbies Pass and I felt great heading up there, then round to Diamond Harbour before  making the decision to take the road to Port Levy. We’d heard it was quite a climb but couldn’t really tell. It was monster – must have been 40 minutes of tough climbing and pretty steep for alot of it. Each time I rounded a corner I’d see a fence line higher up and think that can’t be it. It always was. I’d look to the skyline as it appeared round a corner hoping it would come right down to show the pass – it never seemed to. At the top I thought it was perhaps not a good idea to head straight down the other side (it’s a dead end) but wondered about committing Jo to it by continuing on. Sense prevailed and I waited for Jo, we agreed to turn back round. Round the bays, up over Evans Pass and then we tagged on down to the end of the spit to ensure we got over 100 miles. Ran 3 miles off the bike.

Swim to and from a 5.7k swim session. Trying to keep today abit easier as Scott and Erin had invited us over for dinner. I headed out along the West Coast Road to Oxford. The wind picked up and I had 90 minutes of tough tough riding into it. My loop ended up over 80 hard earned miles. I ran 20 minutes off the bike before showering and trying to ride easy over to Scotts place. Despite this I was super hot when I arrived and took a dip in their pool to cool down. Chris and Marilyn MacDonald came over as a well and we had a lovely evening. Scott and Erin are great hosts, making us feel so relaxed. They have a lovely house and great barbeque area with fire place ! It was such a fun evening. We were able to stay later and drink a little more because Chris and Marilyn offered to drive us home – no need to ride back !!

Met Scott, Chris, Marilyn and Blake for the Gorges ride. Lovely group ride – 3 pairs each taking turns on the front. This was until Marilyn started here 3 minute intervals. The pace upped and it was fast riding till we got to Oxford and had a break. Coming back in along the Old West Coast Road was super quick. Blake and Chris did big pulls on the front, Scott and I shorter ones. We agreed that since they were the Pros and we were just doing it for fun they should do more work ! We were shifting at 24 mph and Marilyn was still managing to do her 3 minute intervals off the front. Got back with 93 miles in 4h45 of hard riding. Ran off the bike and felt great. Ran for 90 minutes.

Jo and I decided to have a steady exploration ride. Headed out to Charing Cross and was enjoying it but then had about an hour into a brutal headwind. I stopped when we got to the turn point. When Jo arrived she wasn’t in a happy place…. she had to sound off and quite alot of “words’ were hurled into the wind. We turned with the wind and seriously motored. Having spent 3.5 hours for the first 55 miles we did the next 58 miles in just under 3 hours. It was a great ride. I did a 5 miles fast brick which was fully motivated by notching my weekly run Eddington Number to 64 !!

This entry was posted in Training and tagged Christchurch, New Zealand. Bookmark the permalink.